SAC: Can the income from the sale of a cooperative apartment be exempted from tax?

In its judgment 2 Afs 211/2020-29 of 04 November 2021, The Supreme Administrative Court (“SAC”) considered a dispute between the Tax Office for the Moravian-Silesian Region (“the tax administrator”) and the applicant. The tax administrator found through its own investigation that the sale of the property had taken place without fulfilling the conditions for exemption under article 4 paragraph 1 letter b) of the Income Tax Act (‘ITA’) and invited the applicant to file a supplementary tax return.

The complainant became a member of a housing cooperative in 2004 and has had a tenancy relationship to the cooperative apartment since 2005. In 2013, she acquired ownership right to the cooperative apartment free of charge and sold it in 2014. According to the complainant’s interpretation, the cooperative apartment should have been exempt from personal income tax under the interpretation of article 4 paragraph 1 letter b) of the ITA. In her argumentation, she further referred to the judgment 2 Afs 20/2011-77, in which the Supreme Administrative Court ruled that membership in a housing cooperative can be included in the five-year time test. In 2013, in article 4 paragraph 1 letter b) of the ITA, the law only referred to the vague concept of “acquisition” and did not clearly state the concept of “acquisition of ownership right”.

The SAC, however, disagrees with this argument and adds that the legislation in force in 2013 cannot be applied, as her income from the sale of the apartment did not arise until 2014. According to the ITA in force since 1 January 2014, the period during which the complainant was a member of a housing cooperative cannot be included in the five-year time test for entitlement to tax exemption. Therefore, the complainant could not be entitled to exemption from income tax.

Preclusion of the time limit for tax assessment

The complainant further disagreed with the extension of the tax assessment deadline and argued that she had failed to declare the exempt income from the sale of the cooperative apartment in her tax return, i.e. she had not fulfilled her duty to claim. Neither the tax authorities’ request nor the supplementary tax return led to the assessment of tax, therefore the time limit for assessment could not be extended. According to the complainant, the tax assessment period should have ended on 1 April 2018.

The SAC disagrees with the complainant’s interpretation and points out that the tax administrator cannot extend the deadline arbitrarily, but only after two conditions have been met, i.e. the issuance of summons within the relevant time period (within the last 12 months prior to the expiry of the tax assessment deadline) and the fulfilment of a causal link between the summons and the subsequent tax assessment.

In the absence of any event extending, stopping or interrupting the running of the time limit, the three-year period for assessment would have expired on 1 April 2018. The first condition was therefore fulfilled by the tax administrator in the form of sending summons to the complainant to file a supplementary tax return on 5 January 2018.

As regards the second condition, where it is necessary that there be a causal link between the summons and the tax assessment, the SAC concluded that the effects of the summons were preserved in the case at hand. The tax administrator used the summons for proof of facts pursuant to article 92 paragraph 4 of the Code of Tax Procedure, not the procedure for removing doubts.

Therefore, the SAC concludes that the time limit for the assessment of the tax was not exceeded.

Next, the SAC considered the complainant’s objection to the assessment of a penalty on the income tax assessed.

Under article 138 paragraph 1 of the Code of Tax Procedure, a taxpayer may replace a tax return that has already been filed with an amended tax return. At the same time, this provision imposes an obligation on the tax administrator not to deal further with the original submission. The amended tax return therefore replaces the earlier submission, which is no longer taken into account by the tax administrator.

For this reason, the tax administrator could not assess the tax, as the complainant filed a second supplementary tax return, where she reported a total tax of CZK 0. Therefore, the tax administrator had to first assess that the amended tax return did not provide a sufficient basis for the tax assessment and then, by its own activity consisting in studying the contents of the tax file, ascertain the relevant facts and then assess the tax on their basis.

On the basis of these facts, the SAC concluded that the penalty was imposed on the complainant in accordance with the law. 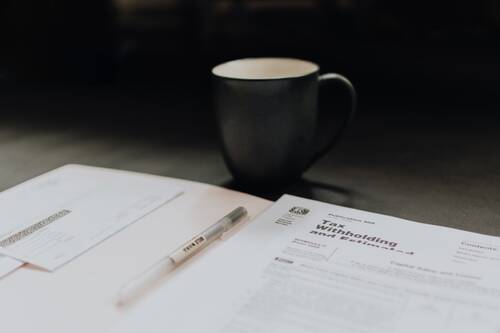